Mongolia Growth Group - All Structures In Place For A Good Run


MNGGF (a real estate company) has hired a new CEO, Paul Byrne, who is a seasoned commercial real estate professional with excellent international experience.
Mongolia is a $10 billion dollar economy sitting on $2 trillion in natural resources.
The vast majority of financial activity takes place in the capital, Ulan Bator. MNGGF’s real estate holdings are located near the downtown core of the capital city.
Mongolia is the fastest growing country in the world. Mongolia's average real GDP growth is projected to be 13.4% annually over the coming five years due to mining initiatives.
All the pieces are now in place to make this a long term holding. In my opinion, this is the only liquid and transparent vehicle to invest within Mongolia.

Note: The stock symbol in MNGGF. The company, in its documents, uses the abbreviation MGG to refer to itself. The rest of the article uses MGG instead of the stock symbol.

Why Mongolia? Why now? This is one of very few countries left on earth that has the ability to launch themselves rapidly into the 21st century. Before a country can progress, it needs certain ingredients: an entrepreneurial culture, political stability, an element of democracy, economic stability, property ownership laws, and law and order. In addition, there has to be an untapped resource (either labor or natural resources) that will draw in capital and elevate the standard of living. Mongolia has met these conditions.

As a second source of evidence as to why Mongolia has met these conditions I point to the KFC indicator. If YUM! Brands (YUM) is opening new restaurants in a country, then the basic ingredients exist for capitalism and investment. YUM! Brands, owners of KFC, know a little something about opening restaurants in foreign lands. KFC now has 4,600 KFC restaurants in China and is the number one brand there. In addition to India and many other countries, KFCs is now opening in several African countries. KFC entered Mongolia in 2013 and plans to open 15 restaurants in the next few years. It took KFC only 18 months from conception to opening the first KFC there. Mongolia is open for business.

Why Mongolia Growth Group (MGG)? Harris Kupperman (currently the chairman) founded MGG and brought the company public in 2011. Harris, who was a hedge fund manager at the time, has now learned the ropes in Mongolia. MGG has retail space, commercial space and land in the capital, Ulan Bator. MGG has gained all the skill-sets to grow with this expanding economy. In addition, the total value of all real estate is not big enough to move the needle of a large real estate company. MGG is the perfect size to benefit and attract little or no competition from the big outfits.

Over the last several years, Harris has acquired real estate assets under the single umbrella of MGG in different stages of development and a talented real estate team for acquisition, leasing and property management (collectively the business structure). He has hired Mongolians with western education and experience. Harris wants to maximize the value of structure. Early this year he made contact with Paul Byrne and hired him as an advisor to MGG. Harris liked Paul's ideas for optimizing the structure and hired Paul as CEO. Paul's experience included: California real estate, development around the Hong Kong International airport, New York Port Authority and work on redevelopment of the World Trade Center area following 9/11, and CEO of a $6 billion dollar real estate firm in Dubai. Paul was looking for a new challenge in a dynamic economy and found that in Mongolia.

The catalyst for owning MGG (besides owning real estate in the fastest growing country in the world) is this: MGG is now aligning its structure to match investors' demand. For example, if an investor wanted to invest in a REIT in Mongolia, MGG in its current form has too many moving parts for that type of investor. MGG is in the process of developing an in-house REIT. MGG will populate this REIT from the portion of its real estate holdings that have been stabilized. MGG will also form a private equity firm for those interested in development. The plan is to develop property, then sell it to the REIT. MGG would then retain a percentage of interest and get paid a fee for management of the REIT. In my opinion, MGG's structure would also support a joint venture with a large investor that wanted to establish investments in this dynamic economy.

To start a reader on their due diligence path, I want to touch on list of interesting conditions in Mongolia. 1990 was a watershed year for Mongolia. That was the year they broke free from Soviet rule and towards a true democracy. The next watershed year was 2009 as the Government of Mongolia repealed the windfall profits tax and struck a deal with Rio Tinto to open one of the largest copper mines on earth, i.e. Oyu Tolgoi or Turquoise Hill. Mongolia has a robust two-party system with a fair amount of freedom of press. Politicians have gone to jail for corruption. Car insurance wasn't required by law until recently. The President of Mongolia's hero is Ronald Reagan (Reagan's speech calling the Soviet Union an evil empire helped inspire democracy in Mongolia). Ulan Bator is more like a city state in a country that is over 2x the size of Texas. The Texas economy is over 100x larger. About half of the populations of Mongolia (2.8 million people) live in the capital, Ulan Bator. Sixty per cent of that population still live in gers, i.e. the animal skin round tents. Heat for the downtown buildings is piped in from waste heat from an electrical power plant. The society is quite homogeneous. The national pastimes are horseback riding, archery and wrestling. There are plenty of clips about Mongolia and the copper mine Oyu Tolgoi on YouTube. CharlieRose.com did a very interesting interview with the then Prime Minister on 9/28/2010. This interview was started me on a path to an investment in Mongolia.

An investor shouldn't get too worked up during election time. The political rhetoric is not that much different than here in the US. Wasn't it during our last Presidential election cycle that we were going to punish China? Politicians say populist things, but underneath nearly all Mongolian politicians have an interest in the mining industry. You can bet in the end, regardless of the political winds, these resources are coming out of the ground over the coming years.

There are massive infrastructure projects (roads, rail, power plants, coal gasification) planned or in progress in the country to get these resources to market.

It is very difficult to get up-to-date information in English on infrastructure projects from official government websites. The last document available that I could find from the Mongolian Ministry of Roads, Transportation, Construction and Urban Development listed infrastructure projects for the years 2010-2016 at $35 billion USD. There have been numerous other projects announced since then. MGG puts the estimate at $56 billion for infrastructure and major industrial projects. Note: $56 billion is over 5x the current size of the economy! 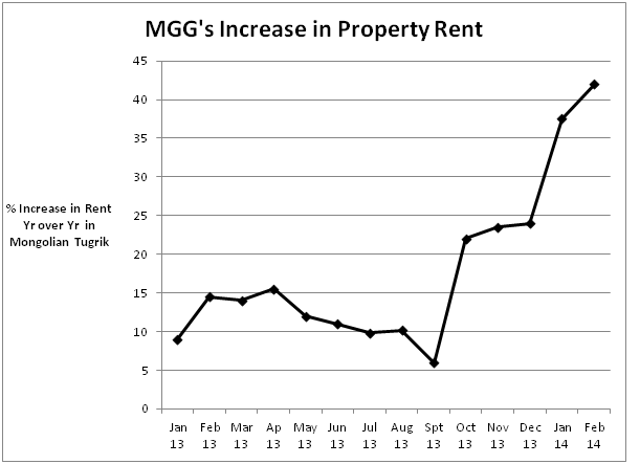 Currently, the book value of MGG is $1.20 per share (audited financials 12/31/2013, $0.92 USD to Can $). As of this writing, the stock is selling just under at 2x stated book ($2.21 per share). The $1.20 understates both the liquidation value and the long term intrinsic value of the company. For one, it would take several years to replace the team of professionals and experience that MGG has in the local real estate market. In addition, there is value in the relationships that the company has established with banks and other real estate professionals in the capital. In my opinion, the stated book value of their real estate is undervalued due to the difficulty finding like properties for the appraisers to use, thus, the value of the land is stated at original cost. Their financials show the value of their land holding or re-development property dropping 23% in 2013. I suspect the value actually rose a double digit amount. This is based on a third party source who estimated land values went up 30% in 2013. Source: http://mad-research.com/ulaanbaatar-real-estate/land-market/land-prices/. Here is their projection for 2013 and historical value of Ulan Bator land prices. 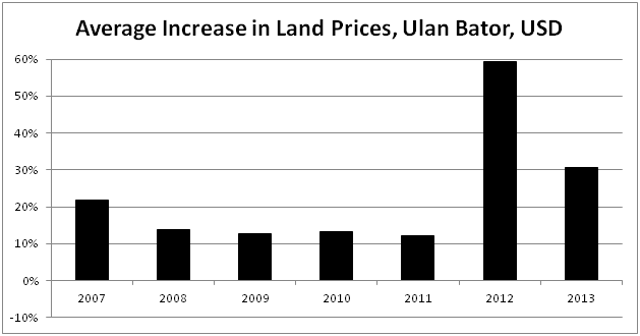 Here is a list of catalysts for investing in this company:
MGG is realigning the business structure to better fit investor demand.
The hiring of a seasoned CEO with international experience in real estate.
MGG is the only liquid and fully audited independent investment available in Mongolia. I don't consider TRQ an independent company, RIO owns 51%
This is the fastest growing economy in the world
The Chairman and CEO's compensation, in large part , based on options
Current per capita income is at $5,500 in Mongolia. This is likely to grow double digit for the next decade.
In Mongolia bank loans cost 12-15%, if you can get them. I believe that MGG, with their public structure, can find outside sources of capital that their competitors can't. If MGG can find a cheaper source of capital, their competitive advantage will multiply.
MGG's holds real estate in the core of downtown Ulan Bator. Space is limited due to only one main through street east and west, and to the north and south bounded by mountains. Real estate will continue to sell at a premium in the core downtown.

I should also mention that the value of the Mongolian Currency has been weak of late. In my opinion, over the longer term this won't be a problem to a long-term investor.

I can't think of another company that is this transparent. MGG puts out a monthly newsletter discussing recent developments at: http://mongoliagrowthgroup.com/investors/monthly-shareholder-letters/ . I believe the stock should sell at a premium to book value. In 2011, the stock sold for 4x book value. Currently, it sells for 2x understated book value and in my opinion the value of the company has gone up and the future strategy of the company is clearer.

I have met both Harris Kupperman and Paul Byrne. They are long-term sharp investors and are doing the right things to create value over the next 3-5 years.

Editor's Note: This article discusses one or more securities that do not trade on a major exchange. Please be aware of the risks associated with these stocks.

Additional disclosure: I own MNGGF for the hedge fund I manage. I have been accumulating this stock. I have no current plans to trade the stock.
Posted by Economy & Finance at 8:09 AM