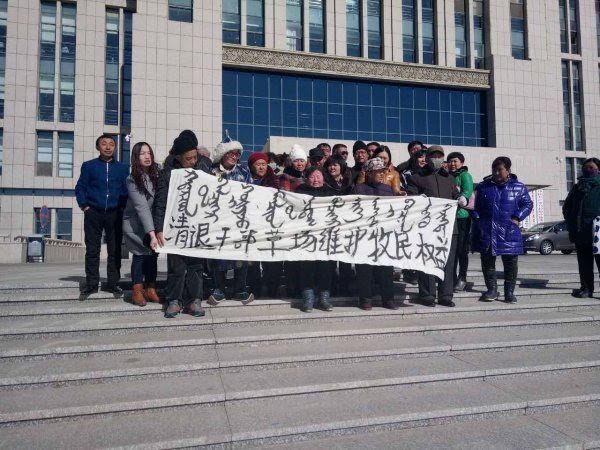 “Today we gathered in front of the Banner government building from all corners of Urad Middle Banner, urging the government to force those government officials to give up their land illegally appropriated from the local herders,” a herder’s representative named Burinzayaa told the Southern Mongolian Human Rights Information Center (SMHRIC) over the phone.

“Hundreds of government officials have illegally occupied our collective land under various pretexts. In accordance with relevant laws and regulations, these officials must give up the land immediately and unconditionally,” Burinzayaa added.

According to a written statement the SMHRIC received from the protesters, the Bureau of Animal Husbandry of Urad Middle Banner has been engaging in illegal appropriation and auction of grazing lands collectively owned by local pastoralist communities. More than 1,000 Mongolian herders’ households are affected by illegal land transactions.

“We have been protesting for years. We appealed to the regional government and even the Central Government in Beijing. Our demands are completely ignored,” another Mongolian herder, named Gerlee, told the SMHRIC.

In November of 2013, Mongolian herders from Urad Middle Banner visited Beijing and appealed to Central Government authorities about their grievances, urging the Chinese State Council Letter and Visitation Bureau and the Ministry of Agriculture to restrain local government officials and Chinese miners from illegally occupying their grazing lands.

Shortly after their arrival in Beijing, local police dispatches from Urad Middle Banner rounded them up in Beijing and brought them back. The herders have been confined to their communities and barred from communications with higher government authorities since they were brought back from Beijing.

According to written communications received by the SMHRIC, since 2006, the herders have been protesting:

1. Illegal land expropriation and land sale by local government officials to the Chinese;

2. Destruction of the herders’ grazing land by Chinese miners and military bases;

3. The government’s failure to provide adequate redress and compensation to the affected herders.

Organizers of all of these protests and petitions have been arrested, detained and jailed multiple times by the Urad Middle Banner Public Security Bureau. In the latest case, at least nine herders were arrested and detained for staging a protest during the Autonomous Region Party Secretary Wang Jun’s visit to Urad Middle Banner last November.
Posted by Economy & Finance at 9:20 AM